International airports are always a Geography lesson or quiz for me … and many times, I don’t score highly without a question to a gate agent or a quick look at people’s luggage tags … 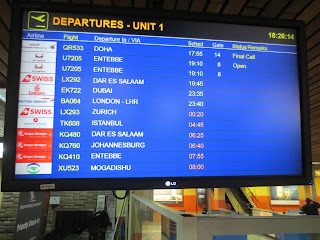 As this trip comes to a close, I have to reflect on some long hours, but short days, and even shorter weeks. Looking very much forward to returning to the States … home … Yes, humbly, but truly, a model Country for the world. The new Kenyan Constitution for example is sculpted after the United States Constitution, now some 226 years old, with relatively few amendments.

The Kenyans are electing their 4th President on March 4th (possible run-off election in April 4th) and making history under the newly adopted Constitution. The world is literally watching.

Three water wells in three weeks … and planning begins now for the next trip … location and timing to be determined. Stay tuned !

Thanks for following the Blog and the good wishes sent along the way !
Posted by Brad Moore at 7:43 AM No comments:

A drop in the bucket … 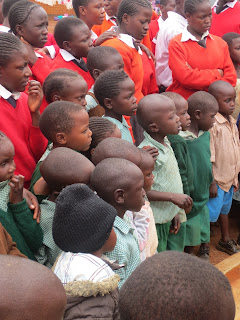 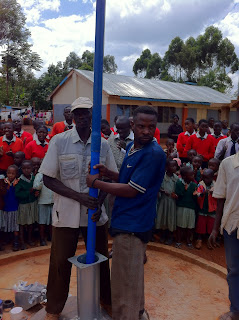 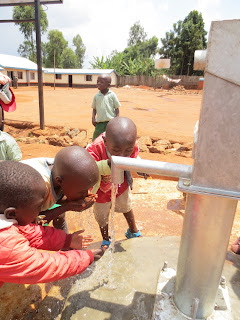 Well number three of the three projects planned for this trip is now completed at the Ephrahim Orphanage.

With over 800 million people around the world not having access to clean, safe water; these three projects are literally a drop in the proverbial bucket. These wells serve a combined total of 400 children, as well as 60 men and women, and frequently the small communities around the Orphanages. While only a small, small percentage of the 800 million, these Kenyans are very excited and grateful for this drop!


As the old expression goes, you can’t stand still; you’re either going forward or backwards.
Visited the Kipsongo slum to check on the water wells of the village of some 400 homes. Well #1 (Serviced annually) and Well # 2 (originally constructed), both by the Wind & Water Foundation, continue to supply clean, safe water. 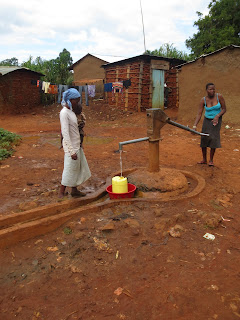 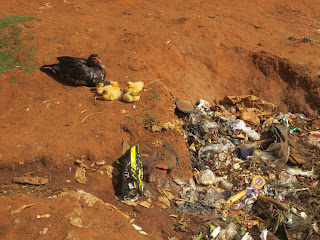 The concern with the slum continues to be their disregard for the need for a clean environment for themselves and their children. Furthermore their neglect for the well-being of their elderly of the community is disturbing.
They have, however, made good strides in replacing the provisional twigs and plastic bags huts with clay and timber houses. Over the past 4 years, they have gone from 35 of these type shelters down to just six. They have been on this site since 1972. 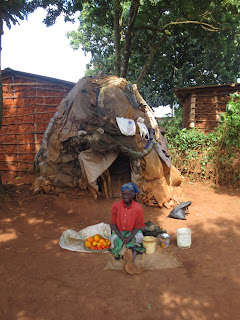 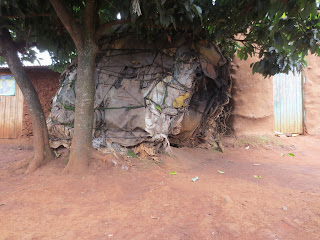 They also now have three new brick enclosed latrines / toilets … a marked improvement and critical to the health of the community. This poverty stricken village of these people of the Turkana tribe did not get this way overnight obviously and it will take the Elders, Pastors and Teachers time to resolve. It is truly though, a life and death situation.

The Wind & Water Foundation is dedicated to continuing to provide them with clean, safe, accessible water.
Posted by Brad Moore at 12:03 AM No comments: 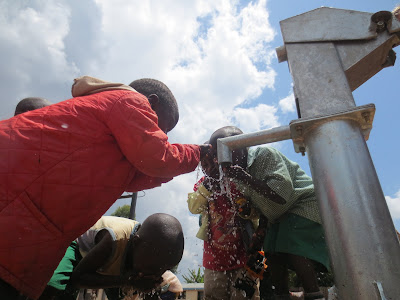 Water Well construction doesn't always line up exactly with the church calendar so we were actually partying on the first day of Lent. I believe though we were theologically sound as we were celebrating the completion of the water well at the Bikeke Orphans Home and Liberty School.

Surrounded by over 150 children, over 30 adults from 5 countries (Saddleback Church’s mission team came by to rejoice with us also), 6 pastors and the Bishop of Shekinah Glory Community; we installed the pump, production string, plunger & rods and the well head. To a regale of joyful voices and alleluias, the pump was engaged and quickly produced a steady flow of fresh, clean, safe water.

Quite an event & not formally planned, by us, either … but great, and memorable. Well number two of three planned for this trip complete! 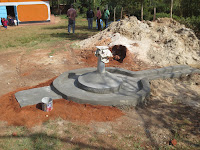 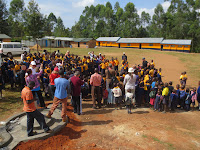 Posted by Brad Moore at 7:24 AM No comments: 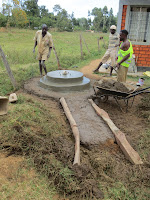 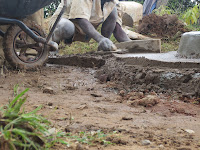 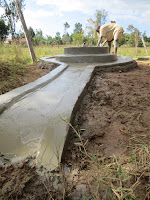 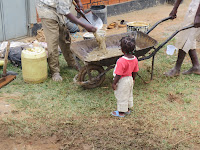 After pump, plunger and wellhead installation, well starts producing a good water flow ... and children make the most of it.

Back to Bikeke this afternoon to check water depth and start brick work to complete the well.
Water depth is a strong 2.2 meters … exceeding our expectations & minimum needed to continue on with well completion.

Bricks are used in two places to compete the well.
(I) Four to six courses are used on top of the culverts (at bottom of the well) to one; transition from the fixed diameter of the concrete culverts to the slightly irregular diameter of the hand dug well hole, two; to prevent any movement of the culvert within the slightly larger diameter well hole, and three; to prevent any soil at the top of the culvert section from spalling off and falling into the well bottom.
(II) Another three to four courses are placed at the top of the well to provide support for the well head concrete work and reduce the diameter of the well hole to match exactly with surface equipment. This top set of bricks is supported on a ledge which is notched into the strong clay of the existing well hole wall. 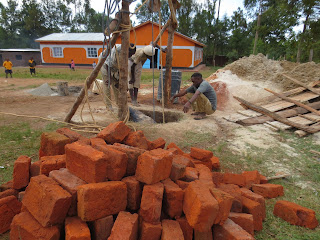 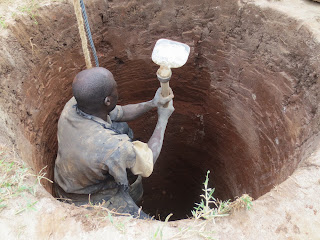 Next step will be the concrete work at the surface; for the well head base and work area … this will commence on Monday with well completion still set for the 15th …

Excited Children but their patience is wearing thin ... not really ... they are just so ready to see the water ... (as we all are!) ... they are learning a lot as they watch the crew work ... 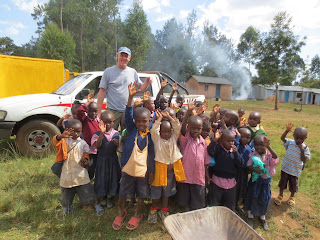 Posted by Brad Moore at 6:14 AM No comments:

We have started the reconstruction of an old rope and bucket water well on the property of the new Kitale Ndogo Orphans Home.

The work will involve digging out the well bottom and making it deeper to insure quality and quantity of water for the orphanage ... shoring the culverts and brick work in the well itself, shoring of the surface area for safety purposes ... followed by the installation of a pump, production string to the surface, concrete well head base & service area, and setting the well head & pump handle assembly. 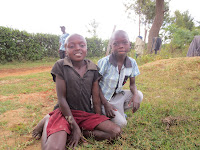 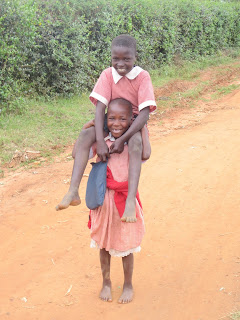 Posted by Brad Moore at 1:24 AM No comments: 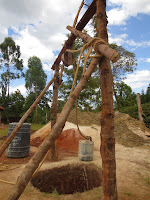 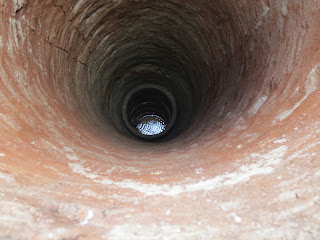 We now have 6 culverts installed in the well creating a strong “well reservoir” for the pump to hang in, and producing string rising to the surface. The total well depth is 13 meters and we currently have a meter of water in the bottom of the well … water surface is at 12 meters. We will now let the well sit idle for 24 hours, looking to achieve a total water depth of 2 meters. This will indicate enough flow from this water table to provide continuous supply for the orphanage, the school, and some neighbors also.

In the picture, the ripples are actually from the water flowing into the well … a very good sign.
In the other picture, the 6 culverts are visible … each culvert is approximately 29” tall … the camera’s viewpoint makes that dimension difficult to get a proper scale perspective. 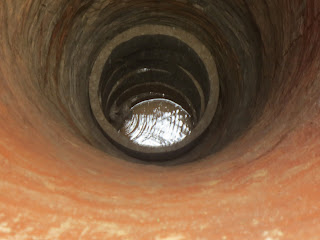 Posted by Brad Moore at 7:20 AM No comments: 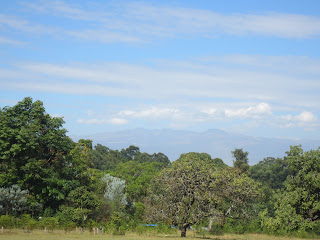 Worth a few minutes on the internet ... fascinating story ... today (February 6th) is her birthday, she would have been 100.
Posted by Brad Moore at 7:40 PM No comments: 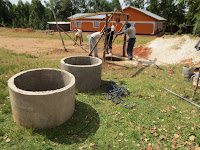 At a depth of 11 meters we found water. The sandy loam soil however, is causing difficulty as it is spalling off into the water at the well bore’s deepest depth. The solution to this is to install the concrete culverts early, again to maintain the well diameter and wall integrity … for digging safety as well as maintaining the well depth already accomplished.

We installed 2 culverts today and will start digging again tomorrow morning. The goal is to get to total depth by the end of the day. Then the completion begins … a four to five day process. As things are going now, well will complete ahead of schedule.

The people of the school and orphanage are already checking things out … How long will it be? The most common question as they struggle with their water jugs, headed to a contaminated source most likely … requiring every drop to be boiled repeatedly, in turn then requiring more firewood ... from the forest region, a couple of miles away ... 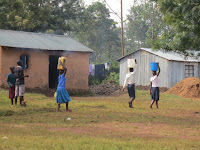 Posted by Brad Moore at 9:58 AM No comments: 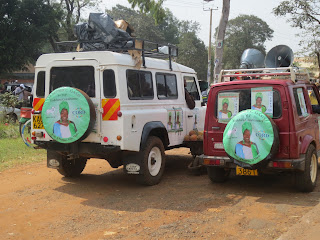 As mentioned in a previous post, March 4th is the election date for local, county, and federal elections, including the presidency. There is a large amount of anticipation, and some anxiety, for this balloting date, in refection to all the deadly post-election violence from the last Presidential election. World political eyes are on Kenya, as they are working very hard for a peaceful national voting process.

There are some very specific items to this election which mark it as history making. There is a new constitution in place since the last election. Yes, a new Constitution!

One article of the Kenyan Constitution calls for the formation of “Counties” as opposed to an overall country wide federal governmental process … read Counties in comparison with States.

The new Constitution then calls for an election of Senators for each County … these Senators will work in conjunction with the existing House of Parliament … Representatives and Senators … aligned with the new Counties.

And the third significant article calls for the election of Women Representatives from each County to work at the Federal level … a major step. Similar to the significance of the US’s 19th amendment passed in 1920, almost 100 years ago.

The “official campaigning” has just started … without the advantage of television and radio being affordable to all Kenyans, the most common method for a politician to get their word out is the car/truck impromptu “parade” with many posters, street banners, and the loud speakers on the lead vehicle ... makes for interesting spectating, and some amusing traffic jams ...
Posted by Brad Moore at 12:39 PM No comments:

Began digging this morning to great Equatorial Kenya weather but mid-morning thunderstorms rolled in and halted the progress. We did get a small break in the rain this afternoon to dig for another meter achieving a depth of 9 meters, after two days. 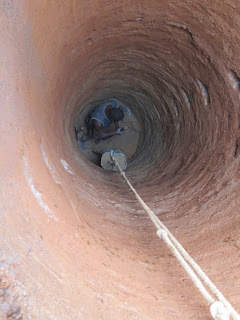 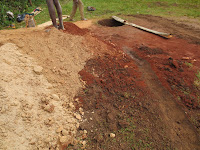 At a depth of 6 meters we encountered a sandy loam soil mixed with the clay … this soil type does not make for the secure walls of the pure red clay. As a result, we will install concrete culverts in a vertical position to secure the walls of the well … and for the safety of the diggers, to prevent wall cave in’s.

Picture: Martin Idewa digs to a depth of 9 meters.

Posted by Brad Moore at 9:10 AM No comments: