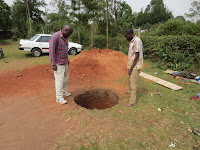 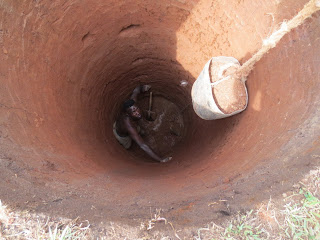 With the support of beautiful weather, the well digging began. The first well is at the Bikeke Orphans Home and Liberty Primary School, serving over 230 children. The school and orphanage are currently buying water daily for the children, using valuable funds for a natural resource which will be available on site within the next week to 10 days.

We were able to dig to a depth of 4 meters today; a perfectly formed, 1 meter diameter hole, in the rich red Kenyan Rift Valley clay. We anticipate finding water at 12 to 15 meters and then completing the well with the wall containment, the water pump, the producing pipe string to the surface, and then the well head.

Total project is estimated to be completed by February 15th.

Travel to the Rift Valley

Getting Started (albeit a slow start)
After a short early-early morning flight from Nairobi International to the western Kenya town of Eldoret, hired a car & driver to get to Kitale … although a short distance (56 km), it took an extended amount of time because of the road conditions … a bouncefest of pot holes, washed away road sections, and heavy traffic of cars, trucks, motorcycles, bicycles, & herds of cattle, goats and sheep. Ref: Same road as detailed in the early posts of 2010 blog – just 3 more years of new, deeper pot holes.

Thunderstorms at noon today prevented any outside work … and rain continues tonight … maybe we should be building cisterns, not digging wells …
Rain does certainly help the beautiful flora of the Kenyan landscape.

The major topic of discussion at the bus stops, pubs, motorcycle taxi stands, and television talk shows is the March 4th elections … from local commissioners to the Federal elections, including the Presidential office. The two prime candidates have an interesting connection which is creating a very, very close race. One candidate is the son of the former President, and his opponent is the son of the former Vice President. The biggest focus is to have a peaceful election, an objective sorely missed in the deadly post-balloting violence from the last election.
Kenya’s national goal is to be the “Business Capital” of Africa … the next decade will be critical, but it is an achievable ambition. Milele kuishi Kenya !

Global Journey - Smile - You're in Kenya 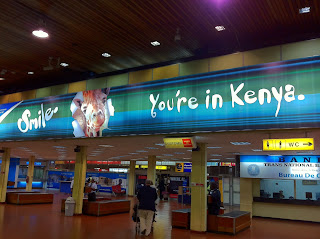 The "half way around the globe" part is done ... now just a short 1 hour domestic flight to Eldoret, and then a 1 hour car ride, and we'll be in Kitale.
And yes, the Kenyan people love to smile. They love life, enjoy life, don't take anything for granted, and are always willing to offer you help.

The first well work will begin Thursday morning at the Bikeke Orphanage and Liberty School, home of some 230 children.
Posted by Brad Moore at 5:21 PM No comments:

In the Rift Valley of western Kenya, the Ephrahim Orphan Home has over 190 children. The new Ndogo Orphan Home in Kitale now already has 28 children. The Bikeke Orphan Home and School provides for over 230 children. All three of these homes operate without access to adequate clean water or with no accessible water at all. 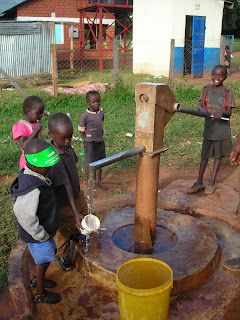 The first trip of 2013 for the Wind and Water Foundation is aimed at taking care of these situations.
Leaving Soon !
Posted by Brad Moore at 4:37 PM 1 comment: